Some of the major provisions of last year’s tax reform legislation were the many benefits provided for businesses, including cutting the C corporation tax rate to 21%. Not to leave out other forms of business, the bill also included what was termed the 20% pass-through deduction that applies to sole proprietorships, partnerships, s-corporations and the like. The short-hand title for this tax benefit is the Sec 199A deduction, and it is one of the more complicated pieces of tax legislation ever conceived by Congress. So complicated in fact that the legislation left a lot of unanswered questions, and for the most part the tax preparation community has sat back and waited for the IRS to release regulations, hoping they would explain the many grey areas of this new deduction.

The Treasury Department and the IRS finally released the 184 page proposed regulations on August 8, 2018, explaining how they interpret and propose to apply the provisions and limitations included in the legislation. The regulations are “proposed” and the IRS is asking for feedback from stakeholders. So these are not the “final” regulations and have left some unanswered questions.

One of the more important issues related of the legislation is the definition of a “trade or business” since that describes the kind of activity that can create income for purposes of the new 199A deduction. The tax code does not provide a definitive “bright line” definition of a trade or business and the new regulations simply adopted an existing subjective definition, that relies on the outcomes of past court cases and interpretive rules the IRS has issued under code section 162 which is the most familiar provision using the term “trade or business”. This leaves some room for interpretation; most notably whether or not rental real estate income qualifies for the Sec. 199A deduction. Our tentative research finds that except for totally passive rental real estate activities such as triple net leases, a rental real estate activity is a trade or business for purpose of section 199A.

The Sec 199A deduction does apply to virtually all pass-through income, referred to as qualified business income (QBI), from all trades or businesses if the taxpayer receiving the income has a taxable income less than the threshold for the 32% tax bracket. For married couples filing a joint return the threshold is $315,000 and for all other filing statuses, the threshold is $157,500. So, if you are receiving QBI in the form of the net profit from a sole proprietorship, K-1 income from a partnership or S corporation, and hopefully the net profit from a rental, your Sec 199A deduction will be 20% of that QBI, figured separately for each business activity.

The deduction is taken below the line, which means it does not change your adjusted gross income (AGI), which limits other tax benefits, and it does not reduce your self-employment tax. It is deducted in a manner similar to your itemized or standard deductions on your 1040 tax return.

Reputation or Skill – Although the original legislation provided a list of the type of businesses that were SSTBs there still remained a lot of uncertainty about some business types, especially regarding one very subjective definition of a SSTB which specified that where the principal asset of such trade or business is the reputation or skill of 1 or more of its employees or owners the business activity was an SSTB. Did this mean, for example, that a self-employed plumber who provided his skill for the business wouldn’t be eligible for the 199A deduction? In a taxpayer-friendly interpretation, the regulations clarify that the plumber and others like him would qualify by defining “reputation and skill” to mean:

(1) Receiving income for endorsing products or services, including an individual’s distributive share of income or distributions from a relevant pass-through entity (RPE) for which the individual provides endorsement services;

The regulation also expanded on the list of business activities that are classified as SSTBs and provided several pages of detail that cannot be included here. The following is a general list of those businesses.

Wage Limitation – The 199A deduction for business activities other than SSTBs is quite a bit different in that the deduction is available to higher income taxpayers but adds some limitations that complicate the calculations. For these, like an SSTB as discussed earlier, the deduction is 20% of QBI if your taxable income is below the thresholds. But once the threshold is exceeded the wage limitation begins to phase in and once your taxable income exceeds $415,000 for a married couple filing jointly or $207,500 for other filing statuses, the 199A deduction is the lesser of 20% of QBI or the “wage limit” amount.

The wage limit amount is the greater of:

So, if a business activity pays no W-2 wages during the year and has no qualified property, and the taxpayer’s taxable income exceeds the top of the threshold range, the 199A deduction would be zero.

W-2 Wages – You would think determining the wages for the purposes of computing the Sec 199A wage limit would be a simple matter of just adding up the wages; unfortunately, it is not. The proposed regulations specify that wages for this purpose will only include wages paid during the calendar year. So wages earned in one year but paid in the next year would be used in the year paid. The wages include wages paid to employees, and if an S corporation, to the officers of the S corporation. Compensation paid to statutory employees (Form W-2 box 13 is checked), is not includible in the calculation of W-2 wages. However wages paid by another employer, such as a staffing agency, are included, but both businesses can’t claim the same wages. The proposed regulations provide 3 methods of determining the total W-2 wage amount. It would seem that what the regulations describe as the “Modified Box 1 Method” will be the one most frequently used by small and midsized employers. That method totals the W-2 box 1 wages, subtracts amounts that are not subject to income tax withholding, and adds the excludable pension contributions included in box 12 codes D, E, F, G, and S. Where the taxpayer is a shareholder in an S corporation or partnership the taxpayer will only use his or her prorated share of the wages from the business.

IMPORTANT ISSUE – The proposed regulations make it clear that W-2 wages must be properly allocated so only wages associated with QBI are included in the wage limitation calculation. A business entity could have non-U.S. source income, investment income, and capital gains income – none of which is QBI. An activity may have a concoction of business activities and perhaps not all of the activities produce QBI, and a W-2 wage allocation may be required

Qualifying tangible depreciable property would include, for example:

NOT included would be Sec. 197 intangibles such as:

Depreciable Period – For this purpose, the term depreciable period means the period beginning on the date the taxpayer first puts the property in service and ending on the later of:

(a) 10 years after the placed-in-service date or
(b) The last day of the last full year of the applicable MACRS recovery period of the property (Code Sec. 199A(b)(6)(B)).

Note: The proposed regulations made it clear that qualified property that is expensed under 100% bonus depreciation or Section 179 will be included based upon their normal MACRS recovery period.

Example: Gary has a retail store that he operates in rented retail space. His property that he used in his business during 2018 included: 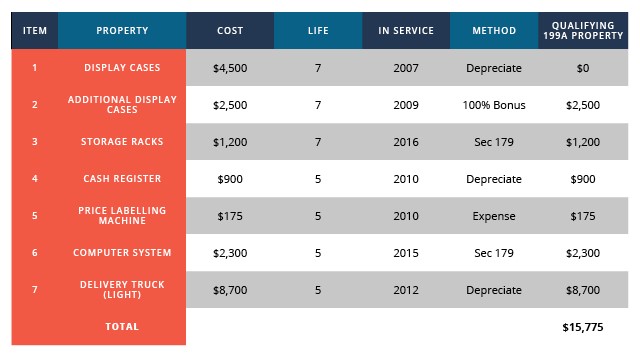 When looking at the example, remember that the value we use for “qualifying 199A property” is the unadjusted basis. So depreciation previously deducted and expensing is ignored for this purpose. However, property counts as “qualifying property” within its depreciable life or 10 years whichever is greater. Items 1, 4, 5 and 7 are past their useful lives but only 1 has been in service for a period greater than 10 years. So all of Gary’s property counts as “qualifying 199A property” except item #1. Thus when the wage limitation is computed for Gary the qualifying property amount used in the computation will be $15,775.

Allocating Qualified Property – The proposed regulations also specify that where the taxpayer is a shareholder in an S-corporation or a partner in a partnership, the qualified property must be allocated to the taxpayer in the same relationship as the depreciation of property was allocated.

Negative QBI – The proposed regulations also provided guidance with respect to business activities that produce a business (QBI) loss. Where a single activity is involved, the 199A deduction from that activity will be zero, and the loss is carried over to the subsequent year’s 199A computation. This is also true if there are multiple business activities and the sum of QBI from each is negative. The proposed regulation also made it clear that this carryover rule does not affect the deductibility of the loss for purposes of other provisions of the Code.

Cracking – This part of the proposed regulations is interesting. No sooner had the proposed regulations been released and social medias accounts lit up with posts about how the regulations had shot down “cracking.” As it turns out cracking is a name given to a scheme to divert QBI from an SSBT to a non-SSBT business activity that qualified for the 199A deduction. Apparently, the Treasury got wind of this scheme and included a provision to stifle that maneuver, much to the disappointment of those who had already organized their affairs to execute the strategy.

Here is what the proposed regulations had to say: “The Treasury Department and the IRS are aware that some taxpayers have contemplated a strategy to separate out parts of what otherwise would be an integrated SSTB, such as the administrative functions, in an attempt to qualify those separated parts for the section 199A deduction. Such a strategy is inconsistent with the purpose of section 199A”.

As a wrap-up, remember the overall 199A deduction is computed in the following manner:

One final note – you and others may be equal partners or S corp shareholders in a business. You might, therefore, assume that each of you will get the same Sec 199A deduction from that business activity. That is not true, because the limitations for the 199A deduction are based upon the taxable income of each individual, not the income from the business.

As you can tell, even the clarifications and IRS guidance are complicated. If you have questions related to how the 199A deduction will impact your tax return or the effect of your business entity on the deduction, please give this office a call.